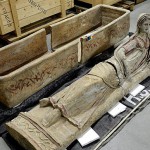 The hidden collection, believed to have been placed in storage 15 years ago by former high profile and now disgraced British art dealer, Robin Symes, was discovered in a Swiss lock-up by Italy’s Carabinieri police with the collaboration of the Swiss authorities.

Dated from the second century before Christ, the trove includes two life-sized Etruscan Sarcophagi, rare examples of their kind, along with 45 crates of other priceless treasures.

Many of these antiquities are thought to have been looted from archaeological sites by tomb raiders. The recovered works have been returned to Rome to be unveiled at a press conference this February.