Increase your sums insured as the Rand retreats. 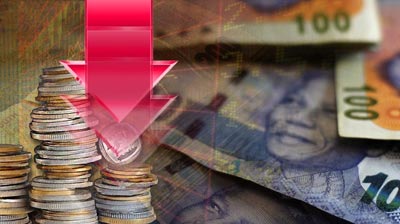 JOHANNESBURG – South Africa’s rand weakened against the dollar early on Tuesday as a bout of risk aversion triggered by lower commodity prices and renewed expectations of a rate hike in the United Sates cooled investor appetite for emerging market assets.

By 0645 GMT the rand had slipped 0.54 percent to 15.8050 per dollar, giving up modest overnight gains as offshore sentiment and local fundamentals weighed on the unit.

Bonds also backtracked, with the yield on the benchmark 2026 Government Issue adding 6 basis points to 9.46 percent.

The statistics agency revised down the country’s 2015 growth figures on Monday, while President Jacob Zuma said he would appeal a court ruling that corruption charges against him be reinstated, shifting focus back onto to South Africa’s creaking fundamentals.

Traders said while rand was hit by local news, renewed bets of a sooner than expected interest rate hike following hawkish comments from Federal Reserve officials was the main driver of rand weakness.

“Focus is back on the dollar. Hawkish statements from two Fed members have kept fears of a June hike alive,” said currency strategist at Rand Merchant Bank John Cairns.

“Rand moves from here will be dictated by the dollar. A lack of event risk today through until Friday, however, means we may have to wait before getting any direction.”

Stocks were set to open lower at 0700 GMT, with the JSE securities exchange’s Top-40 futures index down 0.2 percent.

It is recommended you increase your sums insured on your short term insurance sections, as items are insured at replacement value. Thus meaning replacement of items will increase due to the weakened rand and imports of goods, leaving you the client under insured.