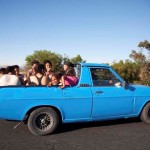 Wheels 24 23/1/2017 :  Cape Town – Reduced speed limits, heavy vehicles to be banned during rush hour… in 2015, Wheels24 reported on new draft road and traffic regulations for South Africa released by the Department of Transport.
Draft regulations, intended to reduce road carnage, include lower speed limits, the banning of transporting children in a bakkie’s load bay and restricting the use of heavy vehicles on public roads.
Finally! New laws on the way
In 2016, as with most laws pushed by Government it takes time to implement, however two amendments have been published including a proposal to revamp the learner’s licence test. Another change to traffic rules will be the implementation of new licence plates.
The draft regulations, published in the 2015 Government Gazette, propose these 5 changes to legislation:
1 Drivers to be re-evaluated when renewing a licence;
2 No more than five people to be carried in a bakkie load bed;
3 Children not to be transported in a bakkie load bed;
4 Speed limits to be reduced from 60 to 40km/h in urban areas, from 100 to 80km/h in rural areas and from 120 to 100km/h on freeways running through a residential area;
5 Goods vehicles above 9000kg GVM to be banned from public roads during peak travelling times.
Click here for the full list of proposed laws
New amendments made
In November 2016, Government has published two amendments to the National Road Traffic Regulations in its National Gazette (No. 40420).
These amendments pertain to laws regulating transport of school children within the load bay of a bakkie as well as speed regulations for heavy goods vehicles.
In addition, the Department also announced that it would re-evaluate the current K53 learner’s test.
________________________________________

REVAMP ON WAY: The K53 learner’s manual is set to be revamped in the near future. Image: iStock
Transporting children on bakkies
Lawyer Alta Swanepoel, of Swanepoel and Associates CC, explains: “The existing provision prohibits transport for reward already and the distinction is to continue making it illegal for scholar transport for reward but that other transport for reward will be allowed in the goods compartment if it complies with the NLTA (National Land Transport Act).”
What about proposed speed limits for heavy goods vehicles?
Swanepoel said: “The speed limit for goods vehicles with a GVM over 3500 kg up to 9000kg applies to all vehicles but the speed governers will only apply to the newly registered vehicles. These vehicles must also display a sticker with a ‘100’ limit. ”
‘Hazardous practice’
According to Arrive Alive: “It appears that what has been closed was that the private operators using bakkies as a form of transport for scholars should end as scholars may not be transported “for reward” (i.e a paid service). It is not a total ban on scholars being transported on a bakkie but will force these ‘scholar transporter’ to use safer vehicles for such purposes.
“These vehicles were also often part of the hazardous practice of the overloading of bakkies with young learners.
“The stipulation with regards to speed governers are also aimed at those operating public transport and heavy goods vehicles and might assist towards greater safety of our commuters on buses and minibus taxis.”

Revamping the K53
The K53 manual for driver’s and learner’s licence tests is getting an overhaul, Transport Minister Dipuo Peters has said.
The review would include updates and improvements suggested by examiners, the driving school industry, and the general public, she said in reply to a parliamentary question from DA MP Manny de Freitas, and which was published on Monday (November 21).
The code 10 test for heavy motor vehicles such as buses and trucks would be reviewed, to ensure people did not choose it because it was easier than the code 8 test for light motor vehicles.
READ: K53 manual revamp – ‘It’s long overdue’
A driver technical committee, which was responsible for all driver-related standards, processes and procedures, was finalising proposals. The amendments would be published in the Government Gazette for public comment. Once the comments had been reviewed, the manuals would be published.
Workshops would be held across the country, and consultations would involve the transport department, the driver technical committee, driving schools, instructors, and any other interested parties.
________________________________________

Justice Project South Africa chairman Howard Dembovsky says: ‘One of the biggest problems in South Africa is that anyone can teach learner drivers to drive, whether it’s your brother, sister, mother, father, aunt or uncle, and they teach new drivers their own bad habits, which adds to the ever-growing pool of not-so competent drivers.”
“Some driving instructors will disagree with me, but the K53 does not cater for realistic defensive driving techniques, as well as modern advancements in new vehicles such as anti-lock braking systems (ABS), park distance control, assisted hill start, and the likes.”
“The K53 revamp is long, long overdue. It was introduced in SA when it was being ditched by other countries, like the UK. And since then they have changed their driving licence requirements at least six or seven times. As long as the people ‘revamping’ the programme are experts, then we look forward to a more modern and more effective training regime.
“Whatever new driving (not driver’s) licence system approach results out of this will incorporate hazard perception testing since, judging by the way some people drive, and is evidenced by the SA’s unacceptably high road traffic crash, injury and mortality rates, is sorely lacking on our roads.”